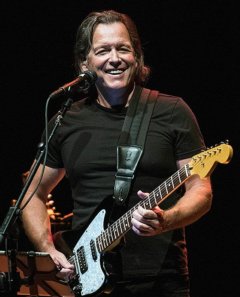 The opportunity to talk with Blues guitarist Tommy Castro on his way to a gig in Sellersville, PA at Sellersville Theater was not one to pass up.
It was always a pleasure to see Tommy Castro make a stop in Charlotte on his various tours throughout the years.  Whether it was with his fabulous band The Painkillers, or on a double bill with Mike Zito, Tommy could be found on the turf he helped carve at the Double Door Inn in Charlotte through the years.  He was a frequent guest on Smokin’ Bluz with Rick Ballew while on tour, and his songs were a staple during the many years Rick hosted his show on WRFX in Charlotte.    Tommy’s last gig in town was over a year ago before the wrecking ball destroyed another landmark in Charlotte.

Today was a good day to catch up on what he's been up to since then.

First on the agenda: Just had to know who some of his favorite blues artists on the scene these days were on the  top of his mind right now and the name Danielle Nicole (Trampled Underfoot) came quickly followed by Mike Zito, and Walter Trout, “better than ever right now. He was always great, but there is just something deeper and more intense with every performance”,Ronnie Baker Brooks “the best kept secret in the blues world…not a stronger player or professional on the circuit. Ronnie has a new album “Times have changed” his first in 10 years, it’s great”.
Others on Tommy’s list include Gary Clark Jr, Derek Trucks and Marquise Knox to name a few.

Then it was time to turn back to the man of the moment: Tommy Castro, with talk about  his past, his present and his new album.

Tommy is back on the road again…this time balls to the walls in full support of his latest album, an homage to his early influences in San Jose California.  His formative years were spent in a diverse neighborhood where FM Radio introduced him to Albert King, BB King, Muddy Waters, Dr John and the Hispanic population seduced him with the sounds of Wilson Pickett, James Brown, and War “Slippin into Darkness”  blaring from the stereos of their iconic low riders.  Blues, Soul and R&B were in the soil of Tommy’s early days, “Stompin’ Ground” his latest album on Alligator Records, is a celebration of all that and more. ”My Old Neighborhood” tells the story of the childhood memories and experiences and is laced with a tasteful Hammond B3 laying down that melancholy groove.  As a storyteller and songwriter, this is Tommy’s finest hour. 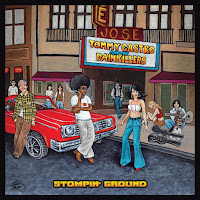 This is an album of Blues, Soul, R&b and R&R.   It is easily Tommy’s favorite to date, and it’s not difficult to understand why.  When you hear “Soul Shake” I dare you to stay still.  This is a song that demands you get up and move, groove and dance baby…and the chorus is one anyone can sing “do do do, do do do, do do do.”

The tracking on this album is perfect.  It is a listeners’ dream, an album that deserves play time in your car, windows open, a long empty road with lots of curves, and preferably a manual drive.  Radio would be remiss to miss this.    Song to song it connects with a great melody, hot musicianship and the ultimate blend of all the things we love about the blues and Tommy Castro’s style.  The final tune “Live Every Day” sums it up ‘you gotta live every day like it’s the last one of your life’.   The side mention of the Blues Cruise on the track is one that brings a quick smile, as he freely admits it’s where he enjoys, in his words, “ultimate jamming – Legendary Rhythm and Blues Cruise every year.  Nothing like it” he said during our conversation.

Recorded at Kid Anderson’s Greaseland Studio in San Jose, the roots delve deeply into the musical kaleidoscope that surrounded them. “Kid understood where I was coming from.  His studio is right there in San Jose. I’d lay down a track, go to Kid and say ‘got any ideas’?   He always did.  Not only is he an amazing guitarist, he plays so many instruments, is a great producer and engineer.   He had a wall of amps and he would plug one of my guitars into and say ‘use this’.  He heard what he was looking for in his head, and made it happen.  We recognized it as knowledge and love of what I was trying to do.  Loved working with Kid.”

When asked where he’s headed, he paused then quietly and thoughtfully admitted, “I’m still trying on a regular basis to be a better player and song writer-stay authentic, but still be fresh.  I am committed to better songwriting and performance every time. And to spend time with those that like my music, I follow the example of BB King.  I saw him with sponsors and fans alike and  he always treated everyone like a  friend. I love and respect people and like to talk with those that appreciate my music, but especially the blues”

Most likely that is one reason why Tommy Castro has a strong fan base in Charlotte.  He loves what he does, brings energy into the room every time, has a first rate band that he is proud of sharing time on the road with, and works his ass off to entertain.   He is also a nice guy.


“Stompin’ Ground”  Record Release Party is being held in venues across America. I highly recommend you attend one near you, or at the very least, treat yourself and download road warrior worthy music to cruise to.

Posted by Mary London Szpara at 9:21 PM No comments: